The City of Tustin is committed to addressing the homelessness crisis affecting our community.To date, Tustin has provided the following direct and indirect support to end homelessness:

As the Orange County Register recently reported, the Tustin City Council had the opportunity to not only tour the newly constructed Tustin Temporary Emergency Shelter, but also gain firsthand experience on the inner workings of the site.

The Mayor, all four City Council Members including all five Planning Commissioners, and city officials participated in a test run that included the intake process to group dinnertime and many stayed overnight.

Last December, the City Council unanimously approved the construction and operation of an emergency temporary shelter for unsheltered individuals at the former Army Reserve site.

“I’m pleased that we were able to construct and create a safe, clean and dignified emergency shelter in such a short amount of time,” stated Mayor Chuck Puckett. “I credit our great staff for working so diligently with the Council and Jim Palmer to get this up and running to promptly assist those in need.”

The Tustin Temporary Emergency Shelter, constructed using modular buildings, will service only people with solid ties to Tustin and a referral from the Tustin Police Department.  No walk-ups to the facility will be allowed.

A night in a homeless shelter: Tustin officials hold a sleepover in the city’s new 50-bed facility that opens this week 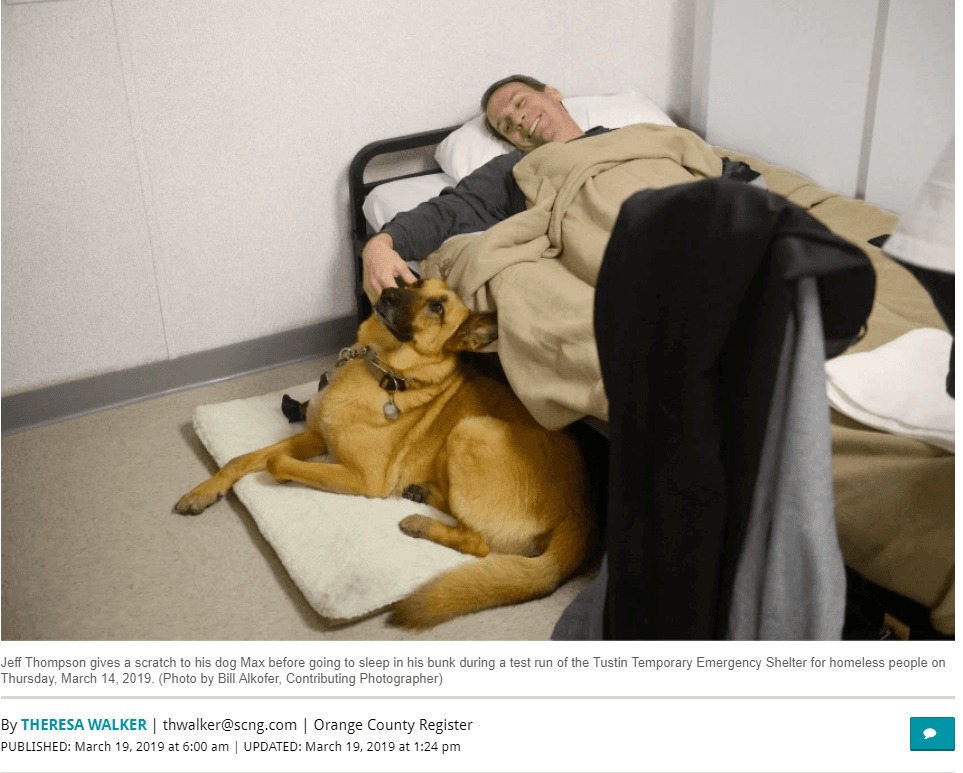 Matt West had trouble falling asleep. He was in an unfamiliar place and trying to sleep under unusual circumstances.

He tossed and turned on his narrow bed.

It wasn’t just that a dozen men shared the same room with him last Thursday night at the Tustin Temporary Emergency Shelter. West, acting city manager for Tustin, said he kept trying to imagine what it might be like for someone who really was homeless — not part of a one-time test run with two dozen other city officials — to sleep here.

How would this bed feel to someone who recently spent most nights on the streets? How would this shelter — built from the ground up with modular units, not as part of a converted warehouse or bus station — sound and smell if you were sharing it with 50 strangers?

And, in the shadow of last week’s scathing ACLU report on other Orange County shelters, could Tustin offer a more humane experience?

Here, 5-foot-high partitions outlining each two-bed cubicle create a semi-private environment for up to 21 people to sleep in a men’s or women’s dorm. Separate dorms will house couples and families with children.

West was told he could store personal belongings in a two-drawer cabinet beneath his bed’s iron frame. If he had more to stow away he could take it outside and store it in metal lockers — complete with a heavy lock and key.

Personal safety — a factor that draws criticism in the ACLU’s report on county-run shelters — is a consideration. Nobody could enter the dorm and other buildings without an electronic badge given to each “guest” or staff member at the shelter. A security guard monitored video cameras that kept watch of the gated perimeter.

The constant white noise of a HEPA air purifier whooshed throughout the night. While a chill wind swayed some potted trees in the shelter’s asphalt courtyard, the dorms stayed relatively warm. And hot water flowed in the showers.

West, a bit bleary-eyed when he turned up in the common eating area for 7 a.m. breakfast, offered reassuring assessment of the shelter.

“I really felt like I was in a private space,” West said. “Both my bed and the room I was in.”

The real test will be how the homeless people who began moving in on Monday, March 18, feel they are being treated — and how their stay might help them transition away from living on the streets.

Watchdogs are paying close attention, something that city officials and shelter operator Orange County Rescue Mission were keenly reminded of just hours before gathering for the overnight stay, which had long been scheduled for March 14.

The American Civil Liberties Union of Southern California leveled troubling accusations at three Orange County homeless shelters in a 106-page report published that morning. ACLU researchers said they found evidence of mistreatment and health-and-safety deficiencies at the Courtyard shelter in Santa Ana, Bridges at Kraemer Place in Anaheim, and SAFEPlace for Women in Santa Ana.

Jim Palmer, Rescue Mission president, said administrators and staff will be diligent about self-auditing the operation of Tustin Temporary Emergency Shelter. Care was taken to hire and properly train the staff, Palmer said, and weekly community meetings with shelter residents will help identify problems as they arise — a practice that Palmer said already works at other Rescue Mission shelters.

“Let’s do something that’s done with dignity,” he told the shelter visitors on Thursday.

An issue that’s prompted problems at other shelters is drug use. At the Tustin site, guests will be allowed to smoke tobacco in designated areas and consume marijuana if they have a prescription. Recreational cannabis, like other drugs and alcohol, will remain prohibited.

The zero-tolerance policy in Tustin will be backed up by random visits from a drug-sniffing dog.

Kola, a Chocolate Lab, has a friendly demeanor, Palmer said. “She’ll lick you and roll over for you to rub her tummy.”

But when her handlers slip her into a working vest, Palmer said Cola is all business: “She can sniff out just about any kind of drug.”

Unlike faith-based Rescue Mission programs, such as its Village of Hope transitional housing campus in Tustin, the new emergency shelter is a secular operation opened under the auspices of Temporary Shelter, Inc., a non-religious offshoot of Rescue Mission.

Palmer explained that the shelter will rely on a variety of intervention services for homeless guests — arranging detox and mental health treatment, employment listings and advice, family reunification and help getting people into transitional or even permanent subsidized housing. As of now, there is no set time limit on how long someone can stay at the new Tustin center, but guests will be expected to put serious effort into moving on.

“You can’t force someone to make a change,” said Bryan Crain, chief operating officer for the Rescue Mission and Temporary Shelter, Inc. “But you can inspire them.”

A key issue — according to both Tustin city officials and Rescue Mission leaders — is how nearby residents will react once the shelter is running at capacity.

Tustin is one of several communities in Orange County opening homeless shelters under settlement agreements in a federal civil rights lawsuit. Tustin is obligated to provide a minimum of 42 beds, a figure that represents 60 percent of the city’s homeless population as of a 2017 census of homeless people in Orange County.

Palmer emphasized the desire to create what he called a “clean, healthy, and safe” shelter. He and other administrators visited homeless programs, including the Orange County-run operations at Bridges and WISEPlace that were criticized in the ACLU report, and the first temporary “pop-up” bridge housing site in Los Angeles, built near Union Station.

The Salvation Army’s new 224-bed homeless shelter that opened last month in Anaheim, another result of the homeless lawsuit, is like Tustin in that both places use modular buildings and aren’t former warehouses or other structures. Homeless experts say the design is a key in creating a shelter with humane and sanitary living conditions.

During intake, guests are given a clean set of clothes to change into after showering, while their old clothes and other belongings that can withstand high heat are placed inside the tent and fired up to 120 degrees. The idea is to kill lice and prevent infestations — issues that are described as problems in the ACLU report.

And as is the trend at other publicly-funded shelters in Orange County, no walk-ups are allowed. Only people with solid ties to Tustin can sleep at the Tustin shelter only after getting a referral from the Tustin Police Department.

Also, a ride-sharing service will provide daily transportation away from the shelter; residents with cars can drive themselves. Such anti-loitering measures are put in place to allay concerns of local residents and merchants.

The site for the new shelter — former military airbase land near The District at Tustin Legacy retail complex on Barranca Parkway– was chosen after Tustin’s city council’s first choice, a spot across from elementary school, drew the ire of parents and other homeowners.

Among those who held signs and protested that first location was Barry Cooper, a businessman and Marine veteran. Cooper went on to win a seat on the Tustin City Council last year and, on Thursday, he and another new councilman, Austin Lumbard, were among the 10 Tustin city representatives who slept at the shelter.

“I want to see what’s the incentive to get out,” Cooper said. “We’ll see.”

Planning Commissioner Jeff Thompson and Tustin police civilian commander Katarina Thomas brought their dogs to sleep beside them in the dorms. Pets are allowed at the shelter, which includes kennel crates and a dog run.

Pets can be deal breakers. Homeless people with pets often will resist moving into a shelter if they can’t bring their dog or cat, and a growing number of shelters are allowing pets on site.

Although he shared a room with other men he knew, Thompson said having his Belgian Malinois, Max, near his bed, helped him sleep better.

“I knew he was on alert, so I didn’t have to be,” Thompson said.

Debra Leet, who does outreach with homeless people and was another guest on Thursday night, gave visiting officials the perspective of someone who had been homeless. Leet, 55, told the group that she’d spent two years surviving on the streets of Tustin after a relationship of 23 years went sour and she ended up with nothing. At one point, she said, she became so malnourished she could barely walk.

She told the officials that there are typically three barriers keeping homeless people from going into a shelter: saying goodbye to their pets, not being able to smoke, and the inability to access or charge their cellphones.

“It’s always those three things,” Leet said. “And you can have all that here.”

Approximately 50 percent of the two (2) Tustin Police Department Community Impact Officers {CIOs) salaries are spent on homelessness issues. This is a cost of approximately $100,000.00 annually, at minimum, for the two (2) CIOs time spent on homelessness. Even while working with the Psychiatric Emergency Response Team, the CIOs have many calls that involve the homeless. This minimum cost is not including calls for service by the patrol officers on calls pertaining to homeless individuals.

In 2015, the Tustin City Council unanimously approved the sale of 2 fourplexes to the Orange County Rescue Mission to house homeless veterans.

The overhauled fourplexes can house up to 32 veterans and their families.

With the closure of the Marine Corps Air Station (MCAS) Tustin, the Homeless Assistance Plan for MCAS Tustin was adopted to address homelessness. The adopted Plan provides sites and designated land uses to accommodate identified homeless needs. To date, the following have been provided at Tustin Legacy:

Community Forums. City staff were engaged in the discussion, evaluation, and provided input to the   community forums.

The City Council has approved and continues to provide grants to assist homeless providers. Within the last five years, the City has provided a total of $106,179 to homeless providers such as Laurel's House, Mercy Housing, Olive Crest, Human Option, Families Forward, etc.

The City of Tustin is proud to participate in the Countywide Commission to End Homelessness which goals are as follow: